The Ascend FS10 kayak is created for the most avid angler to take their fishing to a whole new level.

The Ascend comes with everything an angler would need or want in a kayak from stability to rod holders and everything in between, no detail has been left out of the Ascend.

This 10-foot long kayak is loaded with places to store gear and tools.

The Ascend FS fast as it is comfortable so that no matter where the fish are biting, the kayak will make it.

Our Review of the Ascend FS10 Kayak

While this kayak is designed with fishermen in mind, it comes with a lot of standard features as well.

The kayak has molded-over rubber grips that make carrying easier on the hands, a threaded and sealed drain plug to let water escape easily after use, and dual bungee paddle holders to secure the paddles to the kayak when not in use.

Let’s discuss the features in details.​

The Ascend is constructed out of high-density linear polyethylene making it super strong, durable and ready to take on any challenge. This hard shell kayak can take a beating and still be on top of its game with minimal damage.

The “V” hull comes with an extended keel with strakes and performance rocker that allows for ultimate control over the kayak.

Due to the unique hull design, tracking will never be off as the kayak wields to commands from the paddle with little to no effort. Getting to that special spot has never been faster or easier thanks to the Ascend.

For a sit-in kayak, the Ascend is stable on the water and when entering or exiting the kayak. There isn’t a wobbly feeling when paddling thanks to the hull design making it an ideal candidate for beginner paddlers.

The Ascend comes in at 57 pounds making it super lightweight for a single person to carry to the water and can hold up to 325 pounds which more than enough for tackle and gear as well as what is for dinner.

The Ascend comes with a removable seat that can easily be adjusted with one hand freeing the angler to hold onto the rod or sandwich while waiting for the fish to come around.

The spacious Ascend provides a full range of motion and keeps everything close at hand. From the paddles to the rods and even the drink holder, nothing is ever too far away.

With the capability to convert the stern well for live bait, the Ascend makes for one amazingly designed kayak.

There is everything from rod holders to a dashboard to keep small items close at hand the manufacturers left nothing out when designing such a great kayak for all water conditions.

It doesn’t matter if the angler is a beginner or a pro; the Ascend FS10 kayak offers something for everyone. 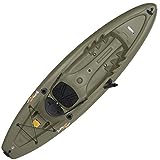 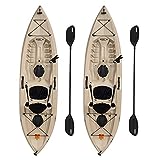 Purchased FS10 to replace an FS10 I had for years. Loved the first one no problems with it. The FS10 I purchased in 2018 is an updated model. The front rides much lower the the previous model. Anything other than flat water is a problem. Water easily comes over the top. I wouldn’t recommend it to anyone. I’m very unhappy and will have to replace it. A waste of hard earned money.